Death in Judaism – “If you strike me down, I shall become more powerful than you can possibly imagine” Obi-Wan Kenobi 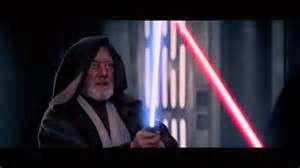 A couple weeks ago, I went to the unveiling of my wife’s Uncle Jeff.  He was around 60 years old and lost after a 9 month bought with Pancreatic Cancer.  I had a good relationship with him during the 10 years I’ve been with my wife and liked him very much.  I never really thought about it when he was healthy or even when he was sick, but something occurred to me at his funeral.  Not only did he become my Uncle, he was my only Uncle.  My father was an only child, and my Mother has one brother, but we were never really close to him.  One of my mother’s sisters husbands passed away when I was very young and I never really had a relationship with my other Aunt’s husbands.

On the day of the funeral, the synagogue was packed with people.  Jeff had such a strong effect on so many people.  The Rabbi speaking about Uncle Jeff was his life-long best friend and delivered what was the perfect combination of a memorial and a comedy routine.  Uncle Jeff, always the jokester, wouldn’t have wanted it any other way.

As he spoke, I thought…

How did Uncle Jeff live his life?

How am I living my own?

What can I learn from him… even now?

Two years ago, I attended a lecture at Aish HaTorah in .  The theme of the lecture was that we should live our lives backwards.  We should start by thinking about what we want said about us at our funeral and work backwards to become that type of person.

I am probably dating myself when I quoted the original Star Wars movie in 1977.  I was only 4 years old when Obi-Wan Kenobi said “If you strike me down, I shall become more powerful than you can possibly imagine.”  I was surprised when I learned that this idea did not start in Star Wars and that, in fact, it is very much a Jewish idea for the Tanya (published in the late 18th century) says that the righteous person protects this world after his passing even more effectively than he did during his lifetime.  Before that, the Gemara Tanis says that our father Jacob never died.  The Torah says specially that he was buried, so how do we understand this?  One of the expansions is that he lives on through his children and grandchildren since they learned from him and emulated his ways.

When we internalize the core values of someone... When we take them into our heart and incorporate them as our own, we keep that person, not only alive, but elevate them to a greater status than when they were in this world.

This is a lesson, not only for how we look at the people that we care about, but for how we live our own lives.  What values would I want people to emulate from me after my passing?  What would I want them to say?  How do I want to be remembered?  This is how I need to live my life.
Posted by Ari Miller at 7:52 AM