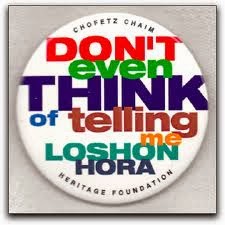 More or less, my son has had a lot of the same kids in his class every year since he’s been in school.  Things went well in the first couple years, but in kindergarten, something happened… teasing.  While it may have existed before, we never heard about it.  We tried to explain to him that teasing is a form of loshen horah.  Loshen Horah is a broad term to describe any type of negative speech.  It doesn’t matter whether that speech is true, false, said behind someone’s back or to their face.  Even neutral gossip that may lead to negative feelings is a form of loshen horah.  The word “loshen” means “tongue” or “speech” and the word “horah” means evil.  We tried to explain why teasing was wrong and one should not do it.  We also explained how one should react when he’s the one who gets teased.  They all had a positive effect, but didn’t have the results that we wanted until… we discovered The Loshen Horah Game.

Just about every night, we have a ritual called “14 minutes, when after bath time is done, the teeth are brushed & the stories are read, my wife and I each lie down with each one of our kids and discuss about our days, tell stories or let them talk about whatever they want to.  It was during this time, where my son & I came up with the game.  We would take turns where one of us would speak Loshen Horah about some imaginary person and the other person had to figure out how to respond.  It went something like this:

Me (in a very silly kid voice): “Hey… did you see Frank (my son doesn’t know anyone named “Frank”) today?  He’s so stupid.  Let’s go make fun of him and tell him that we’re not going to play with him.”

My son: “He’s not so bad.  I bet if we played with him more, we’ll really get to like him.” Strategy: Direct rebuttal to try to diffuse the situation.

Me (still in a silly kid voice): “But Frank is so stupid, let’s go call him stupid-head”

My son: “Him… let’s go play legos.  The teacher brought in new ones for us to play during recess and I want to build a fire station”
Strategy: Distraction.

The silly voice makes it fun for him.  Since we started, we’ve expanded the concept, and the voice, to the Yeitzer Horah Game.  Both games work and help me teach valuable lessons to my children.

The tougher question may be, how do I deal when adults speak loshen horah to me?

What if the speaker is a community leader or Rabbi?

Does it make a difference if they’re speaking badly about an individual person or another organization?

In the past week or so, I’ve had three cases where people spoke or I observed loshen horah.  Here’s what I did:

1. Rebuttal – The first case was when someone (who’s a very learned Jew) I know told me, individually, how another Jewish organization was doing something that was against Jewish law.  I went to the mishneh berurah, and the matter wasn’t discussed, but there was a hint that what the organization was doing was appropriate.  I went back to the individual to show them what I found and they were sticking to their guns.  I told them that I didn’t know how this organization was doing what they were doing, but the organization is made up of good, G-d fearing Jews, and Jewish law requires me (and him) to make an assumption that they are relying on a accepted ruling that neither of us have learned and not that they are doing something wrong.  The person reluctantly accepted the answer.

2. Distraction – The second case was where another Jew (let’s call him Levi) that I know started speaking badly about an individual Jew (let’s call him Shimon) and the organization that they were involved with.  This case was different, because Shimon insulted Levi pretty badly on a very sensitive topic.  I don’t know the whole story, but I know enough to know that Levi has every right to be upset.  Pirke Avos tells us that we shouldn’t try to appease someone when they’re angry so I know that if I try to recommend that we go hang out with Shimon or speak about Shimon’s good qualities, it’s going to upset Levi even more.  I quickly change the subject to something else and the loshen horah ends for now.

3. Removal – I didn’t discuss this matter with my son, because he’s in such a small class where the kids have to interact with each other, but sometimes we just have to remove ourselves from the situation and limit our interaction with certain individuals.  There’s a certain Jew that I know, who has many good qualities, but he’s easily offended and can be demeaning to people who his bad side.  I’ve known him for several years and have always tried strategies 1 & 2 on him, but the situation hasn’t improved and when I interact with him, I often come away feeling frustrated or upset.  When we encounter someone like this, sometimes the best choice is to exit the conversation and remove ourselves from the situation.

When we read through Tanach, it’s sometimes very hard for us to understand how so many people fell victim to the temptation of idolatry.  It seems so unappealing to us that it’s not even a temptation at all.  The Rabbis tell us that after the destruction of the Beis Hamikdash (), the inclination of idolatry was removed from this world, but it was replaced with the inclination to speak loshen horah.

It can be a very strong temptation to say someone negatively about someone else, but we must all do our best to avoid it.