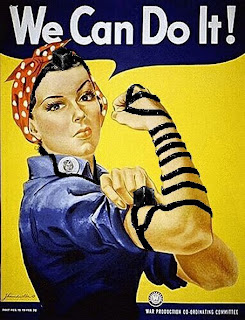 Since before the women's lib movement, people have been asking if traditional Judaism considers one sex on a higher spiritual level than the other. We’ll explore the facts and myths to finally answer the question… Is Judaism Sexist?

It’s not hard to see why someone may think that traditional Judaism could be sexist. After all, women don’t…wear Tefillan, wear a tallis or tzitzit, count when forming a minyan. The list goes on and on…
 Lead the Grace after meals
 Become Rabbis
 Become a Cantor or Chazzan
 Wear a kippah or Yarmulke

We were commanded to wear tzitzit on the corners of our garment in the Torah portion Shelach after someone was caught gathering sticks on Shabbas. This was a crime punishable by death. The Rabbis tell us that Moses pleaded on behalf of the sinner using the argument that, since we don’t wear our tefillan on Shabbas, the sinner didn’t have a reminder that he shouldn’t sin. What sex was the sinner??? A man. 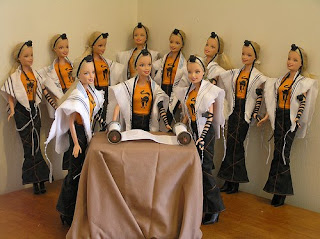 We derive what a minyan is from the incident of the spies in the Torah portion, Shelach. The Torah tells us that Moses sent a group of 12 representatives to spy out the land of Israel before they entered it. Out of the 12, 10 of them came back with an evil report and slandered the land of Israel describing how strong it’s inhabitants are and that the we wouldn’t be able to overcome them. They convinced a portion of the people and complained to Moses that they didn’t want to enter the land. This started the 40 years of wondering in the desert. The 10 evil spies were described as a congregation and this is a source that we need 10 people for a minyan. Just like the incident with the golden calf, all of the evil spies and their followers were men. In regards to prayer, one may ask why we need to pray with a minyan at all. Shouldn’t our sincere prayers count? The answer is that, sincere prayers do count. The Rabbis tell us that because of our sins, the gates of heaven are closed to prayer except for those who pray sincerely or for those that pray with a minyan. The fact that women are not counted in a minyan, what does it tell you about the sincerity of their prayer?

In the Torah portion of Yisro, G-d commands Moses to give the teach the commandments of the Torah to “to the house of Jacob and relate to the Children of Israel.” The great Torah commentator Rashi explains this, seemingly, repetitive statement. He tells us that the House of Jacob was referring to the women and the Children of Israel was referring to the men. The Midrash Rabbah explains that when G-d gave the first commandment to Adam first and then to Eve, they transgressed and the world was almost ruined. To rectify that, G-d gave the Torah to the women first and then the men. It also explains that the Torah was given to the women first because they are prompt in fulfilling commandments. Men were given certain specific commandments because they needed special methods to perform G-d’s will.
After looking at several of the commandments and the reason for them, I think that it’s safe to say that the Torah does consider one of the sexes to be on a higher spiritual level then the other one. I’ll leave it up to you to figure out which one.
Posted by Ari Miller at 8:01 PM