The last time that I drove in a car on Shabbas was just under 3 years ago.  I still remember the day.  It was March 23rd/ the 25th of the Hebrew month of Adar.  It was a nice Saturday morning in early spring when my wife and I got into the car and drove into the city for the day.

You may be thinking… “Wait a minute.  You’ve been a Shomer Shabbas for roughly 10 years.  Are you confessing to a religious relapse?”  Not really.

That was the day that my wife went into labor and my daughter was born. 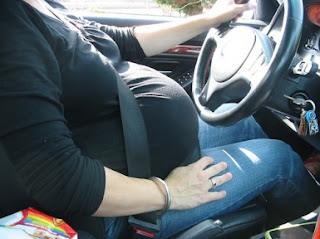 Jewish law allows one to drive in a car, or the like, on Shabbas when there is a danger to someone’s life.  Labor falls into this category.   There is an important question regarding such activity…

At first glance one would think that it’s permissible to break Shabbas in order to save a life.  After all, the Shabbas isn’t really suspended when you’re driving to the hospital.  You can’t start blasting the radio or make telephone calls that don’t relate to the trip.  The Shabbas and its rules clearly still exist.

There’s a hint the answer in this weeks parsha.  The Torah tells us about the High Priests (Kohen Gadol) wardrobe.  Among the many special garments is The Ephod which can probably best be described as an apron.  The Torah clearly states that it’s made from a mixture of wool and linen.

For those of us familiar with the prohibition of shatness (mixture of wool and linen in the same garment), this should throw up a big red flag.  After all, when we buy new suits or clothing, it’s recommended to bring them to a shatness checker and make sure the clothes don’t contain a forbidden mixture.  If they contain both wool and linen in the same garment, it would be forbidden to wear it.

One would think that the classical Torah commentators would have in depth explanations about how the Kohen Gadol can wear a garment with such a mixture, but they seem to be totally silent on the issue.  I would imagine they’re silent, because the answer is obvious.

By the same logic, the prohibitions of Shabbas that inhibit saving someone’s life simply don’t apply when their life is in danger.  I drove to the hospital without hesitation.  In fact, the Mishneh Berura has very harsh things to say about someone if they would hesitate in such a situation.  We shouldn’t try to be more stringent then the Torah expects of us.
Posted by Ari Miller at 9:10 PM