Parsha Ki Sisa – The Golden Calf… what the heck is going on here?! 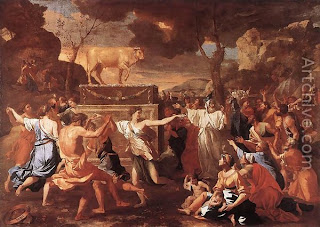 The incident of the golden calf in the Torah portion of Ki Sisa is one of the most troubling things in all of Chumash.

It’s hard for us to understand that a nation that stood at the foot of and heard the words of the G-d directly could possibly sink so low in a short 39 days later.

To better understand the situation, let’s first go over the words of the Torah translated from the Sapirstein Edition Artscroll Rashi Chumash.  I’m going to highlight some key words that we’ll focus on after the text.

Chapter 32, Verses 1-5: The people saw that Moses delayed in descending the mountain and the people gathered around Aaron and said to him “Rise up, make for us g-ds who will go before us, for this Moses, the man who brought us up from Egypt – we do not know what became of him!”  Aaron said to them, “Remove the golden rings that are in the ears of your wives, your sons, and your daughters and bring them to me.”  The entire people unburdened themselves of the golden rings that were in their ears and brought them to Aaron.  He took it from their hands and he bound it in a scarf, and made it into a molten calf; then they said, “These are your g-ds” O Israel, who brought you up from the .”  Aaron saw and built an alter before him; Aaron called out and said, “A festival to Hashem tomorrow!”

Verse 25-28: Moses stood at the gateway of the camp and said, “Whoever is for Hashem, the me!” and all the Levites gathered unto him.  He said to them, “So said Hashem the G-d of Israel, ‘Let them place every man his sword on his thigh, and pass back and forth from gate to gate in the camp; and let them kill every man his brother, every man his fellow and every man his relative’”  The Levites did according to the word of Moses, and there fell from the people about three thousand men on that day.”

Verse 35: Hashem smote the people with a plague, because they made the calf that Aaron had made.

Let’s delve a little deeper into some of the back round stories (Midrashim) and commentaries.

1.      Let’s start with the word “g-ds” in the second line of my text.  As we know, the Torah has many names for G-d.  Some of those names can also be used for other things.  In our verse, the Torah uses the name Elokim which can mean G-d, but can also mean leader.
2.      To back up the “leader” explanation, we only need to go to the next line where the Torah uses the word “man.”  If the people really wanted to make an idol or another G-d, why would the purpose of its creation be because Moses was missing?  Moses was clearly a man and their leader.  The creation of the golden calf was clearly a poor attempt and trying to create a middle entity between them and G-d.  Why did they think that needed something in between them and G-d?  For that we can go back to the 10 commandments in the Torah portion Yisro where the commentators tell us that after hearing the first 2 commandments directly from G-d, it was too much for the people and they asked that Moses say the remaining commandments instead of G-d.
3.      In line 5, Rashi tells us that Aaron told the men to get the jewelry from their wives as a delay tactic.  He expected their wives to give them a hard time.  In fact, he was correct.  None of their wives gave up their gold or participated in the incident with the golden calf in any way.
4.      In line 8 it says that, “They said” “O Israel.”  Clearly it seems like some people who are not Jews are speaking to the Jewish people.  Rashi tells us that when the Jewish people left , a great conglomeration of different people followed them and it was in fact these people who incited the incident with the golden calf.  This also explains who “the people” were that gathered around Aaron in the first place.
5.      Once the calf was complete, Aaron states that there will be a festival to Hashem tomorrow.  In doing this, he was saying two things.  The first is that he was trying to delay them a day, because he knew that Moses would be back tomorrow.  The second was that he was telling them that there is only one G-d, using the proper, undisputable name of Hashem.
6.      Popular misconception is that the golden calf was worshiped by the entire nation or at least close to it.  The Torah tells us that only 3,000 men committed the most grievous of sins.  I can’t find a reliable source for how many people died in the plague, but I’ve heard the number 30,000 thrown around.  There were roughly 3 million people that left .  30,000 represent 1% of that.  3,000 represents .01% of that… a rather minuscule number compared to the people at large.

The crime that the rest of the people were guilty of was not stopping it.  We are truly one people and we share in each others joys and sorrows.  If our fellow sins and we have the ability to stop it and we don’t, we bare some of the responsibility.  We should try to keep this shared responsibility in mind in our daily lives

I originally wanted to also write about Aaron’s role in the incident and how someone of his greatness could have participated and then get elevated to become High priest just a few Torah portions later, but since the article is long enough already you’ll have to wait until next year.
Posted by Ari Miller at 7:53 PM