For the past 10 or so years, I’ve been a quasi vegetarian.  My reasons for not eating so much meat are the same as the “quasi” part of my quasi vegetarianism.  I didn’t stop eating meat, because of health or moral reasons.  I did so, because meat, or the idea that meat comes for an animal grosses me out.

I’ll eat chicken, fish or even beef in the right circumstances.  The right circumstances don’t always happen.  If I see bone, fat, feathers, skin, or anything similar anywhere near my plate, I get squeamish and stick with the vegetables.  After 7 years of marriage, my wife, who’s a dietician, knows what to do if she wants to cook me any of the above.  She prepares my dish in the kitchen or at the other end of the table and brings me a plate that has no reminders that the food used to be alive.  Though this is a pain in the neck for her, she does it without complaint.

Even though most people don’t share my views on eating meat, there are few of us who can spend a lot of time at a slaughter house and not be a little nauseous. 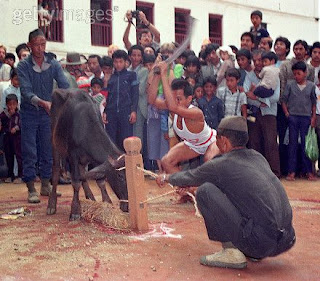 All the more so, the thought of animal sacrifice, as outlined in this weeks Torah portion, can make us feel a bit uneasy.  Vayikra goes into many graphic details about how animals were slaughtered in the Mishkan (Temporary Tabernacle) and in the Beis Hamikdash (.)  What many people don’t talk about is that when the Moshiach (Messiah or Savior) comes and builds the third and final Beis Hamikdash, we will start performing regular animal sacrifices again.

On the surface, slaughtering animals as offerings seems not so nice and barbaric at best.

Does G-d really need our sacrifices?  Do we really think that we can make up for a sin by sending a nice piece of steak up to G-d?  Both of these answers seem to clearly be no.  We know the G-d is totally self sufficient and doesn’t need anything from us.  Following that logic, if he doesn’t need to receive the animal offering, it must be that there’s something about us where we, spiritually, need to give the offering.

There are many possible explanations.  I’m going to try to focus on a few that best answer the question for me.  An animal offering not only represents a monetary gift, it also represents a dedication towards the fulfillment of Hashem’s will.  Imagine planting a new fruit tree and waiting patiently for it to produce fruit.  Those of us with backyard gardens can tell you that the first fruit or vegetable is always the best, because it’s the first product of your hard work.  Torah law demands that we give those first fruits to G-d.  If it was just a monetary gift, then it wouldn’t make a difference whether it be the first, second or third.  The first is only worth more to the owner, not to general buyers.  By giving it to G-d, we are acknowledging that he is the true source for all that we have.

Another explanation is that Chassidic sources explain that our soul is made up of several parts.  There is a G-dly soul that wants to perform the commandments set forth in the Torah.  Then there is an animal soul that wants to fulfill its basic wants and desires, even if the contradict the Torah.  By sacrificing an animal, we are in a sense, diminishing the power of our animal soul and strengthening the power of our G-dly soul.  If we can perfect this process then by the time the Third Beis Hamikdash gets here, which should be very soon, we’ll have a complete understanding of animal offerings.
Posted by Ari Miller at 10:00 PM