Toulouse Murders: How can we understand such tragedies? 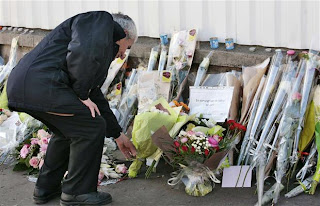 Whenever a tragedy happens, we search for answers as to why.  There’s something in our nature that we have a hard time accepting meaningless destruction.  If something happened for a purpose greater than ourselves, we have a much easier time accepting it.

Only G-d knows why he does what he does, but we can come up with a list of potential answers as to why such things occur.  We won’t be able to come up with a clear understanding, but maybe we can derive some comfort through the process.

These answers has as much to do with the 4 Jewish souls and 3 French policemen that were taken from this world by a madman as much as they have to do with any similar event.

I can’t begin to clarify why this tragedy happened, but I do know that if we are grieving, there’s a reason for it.  We need to take the suffering that we feel and strengthen ourselves to dedicate even more of our lives to G-d.

It’s not enough that we just go about our lives.

It’s not even enough if we make up for the mitzvahs that Rabbi Yonatan, Aryeh & Gavriel Sandler along with Miriam Montenago would have done.

In their merit and in the merit of all Jews who have been taken from this world by our enemies, we must learn enough Torah and perform enough mitzvahs until the time that we can be reunited with all of our brothers and sisters with the coming of the moshiach may he come immediately.
Posted by Ari Miller at 8:51 PM