Parsha Terumah – Too many details…

As I was reading the Torah portion of Terumah this year, a thought occurred to me…

Too many details… There are many places where the Torah leaves out a lot of the background story and allows the Talmud and the Middrash to fill in the blanks. Tefillan are a great example. All the Torah tells us is that we should wear them. The oral tradition tells us what they are. In Terumah, it seems to give a lot of details that aren’t so inspiring or interesting. If I would have been on the Torah writing committee, I would have probably opted to spend more time with Abraham, Isaac & Jacob and less time on the exact details of the Tabernacle.

The parsha give us a plethora of details about the construction of the following the Ark, Table, Menorah & Tabernacle. This might have been very important for them to know how to build, but what relevance does it have to us? Let’s give a brief overview in no particular order… 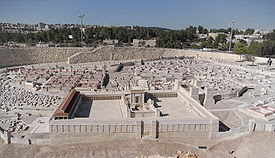 One of the many questions that’s asked about the 3rd Temple is how is it going to happen? Since it will exist at the site of the Temple Mount where the Dome of the Rock currently resided, how will the transition take place?
Do we have to take over the Temple Mount, knock down what’s there and build the Temple?
Will our cousins be so inspired by the truth of the Moshiach that they will voluntarily take down the Dome of the Rock.
Where will we get the supplies from the build it?
Where will we get the expertise to build it?

There seem to be a ton of questions about the details of how this will work.

The great Torah commentator, Rashi, gives us a clue on how to understand this in his commentary to chapter 25, verse 31. After all the details of how the Menorah should be built were given, Rashi says that Moses was still confused about how to build it. So G-d told him to throw a kikar of fold into the fire and G-d formed the Menorah himself.

One of my favorite answers to how the 3rd Temple will be come about is that G-d will build it in heaven and place it on the Temple Mount himself. The key for us is to try not to get too overwhelmed with the details. If we do what we’re supposed to do, learn Torah and perform G-d’s commandments, he’ll take care of the details.
Posted by Ari Miller at 9:22 PM