Was there really a miracle on Chanukah? 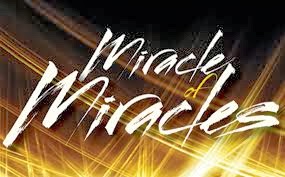 This morning, I found an obscure story that dates back to the time of Chanukah.  The basic premise was that there were actually no miracles on Chanukah at all.

It points out that even though there was technically one jar of oil that was found, it was a certain type of old oil that lasts twice as long so it would burn for two days.  It also says that the Kohanim (priests) used a certain type of wick which lasts twice as long, bringing it to 4 days.  It also says that since Kislev was during the colder season, oil burned twice as slow bringing it to 8 days.

It also points out that the Maccabees were Kohanim from the family of the high priest which were genetically stronger and more powerful then the average person.  Therefore, even the victories in battle weren’t a miracle.  Yes, they were outnumbered, but they were big, strong and knew out to mix it up.

Apparently, the writer was not alone in these beliefs.  According to this, a lot of Jews felt the same way… the Chanukah miracles were just a bunch of coincidences which in no way deviated from the natural world order.  They simply didn’t believe they saw miracles.

If we were there, which side would we have been on?  Would we have seen these things as miracles or tried to explain them away as natural occurrences?

Now… if you’re thinking that you don’t believe this one bit and there’s no way this opinion even exists, you’re correct.  I just made the story, but the idea pervades our life.

Do we see things as miracles or as natural occurrences?

In our time, there are more Jews coming back to observant Judaism than any other point in history.  Even a generation or so ago, practically everyone predicted that Orthodox Judaism was going to die.  When my father was born, in the 30s, not only was Orthodox Judaism predicted to get wiped out, it looked like all of Judaism might not make it.  So, what happened?

Somewhere, in this short time period, for the first time in history, tens of thousands, if not hundreds of thousands of Jews, decided it was time to return to their spiritual roots.  There’s no logical explanation for this.  Yes, we had some great Rabbis, but the Jewish people have always been blessed with a few great leaders in every generation.  How do we explain this?

We can either try to rationalize it and says that the horror of the holocaust somehow reawakened our spirit of religion or you can call it for what it is… The Ba’al Teshuva movement is nothing short of a miracle on par with anything we read about in the Bible.

From the time I was born, the Jewish people had a state including all of .  From my perspective, there doesn’t seem to me anything miraculous here at all.  When I take history into account, even recent history, it paints a different picture.  When my older brother was born, Jews had no access to the .  When my parents were born, the state of didn’t even exist.  When my great-grandparents were born, Jews returning to was nothing more than a dream.  So, what happened?

A group of poor, downtrodden people of , after two thousand years, decided it was time to come home.  With little political support, little money, no experience in building a nation or fighting, they built a nation.  They were joined by their brethren from the concentration camps, from the Arab countries, from and eventually more from , but none of these people brought any great skills to help build this nation other than an unshakable belief that it was time to come home.

Do we try to rationalize how this happened?  Outnumbered, outgunned, unwanted, unskilled & unsupported, the Jewish people rebuilt their home.  Is this nothing short of a miracle?  Even David Ben Gurian, who never considered himself religious, said “In Israel, in order to be a realist you must believe in miracles”

It’s really up to us to decide.  Are we going to be like the skeptics who are so entrenched in our beliefs that we try to rationalize the irrational… or do we accept that at some point it’s more rational to recognize that the had of G-d is in every aspects of our lives and we have the privileged of witnessing the open miracle that preludes the ultimate and final redemption of the Jewish people.
Posted by Ari Miller at 10:34 AM