This past Thursday night my wife and I were blessed with a perfectly healthy baby boy.

Over the past 9 months or so I’ve been praying for three things. 1. That my wife comes through the delivery healthy.  2. That our new baby is healthy. 3. That the L-rd limits the pain that my wife has to endure during childbirth.  I was fortunate enough to be blessed with all three.  Since the sin of the forbidden fruit in the Garden of Eden, women have had to have pain during childbirth, but some labors take longer and some go shorter.  While I prayed many times that the labor be short, I didn’t quite expect what I received. 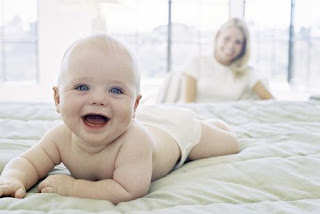 At roughly 12:45 am Thursday night, my wife woke me up and told me that labor at started.  I called my mother in law, who came over, got dressed and we left the house around 1:25 am or so.  The hospital was 20 minutes or so away.  At about 1:45 am, when we were only a few blocks away from the hospital, our new baby decided that he didn’t want to wait and we gave birth somewhere between 8th & Market Streets and 12th & Sansom Streets.  Considering how close we were to the hospital, I kept driving as quickly as possible until I got to the ER entrance just a few moments after my child was born.

After we settled down in the hospital, my wife had the frame of mind to tell me about a Dvar Torah that she had read a few days before.  She said that we think that the coming of the Moshiach (messiah) and the redemption seem to be far off things.  In our minds, we can’t imagine them happening so soon and when they do happen, we expect to have some warning.  The reality is that the very next mitzvah that someone does anywhere in the world can bring the Moshiach and we can all be together in at the 3rd in a matter of moments.  In fact, one of the Rambam’s 13 principles of Jewish faith is to believe that the Moshiach can come today.  Just like when our baby was born in roughly an hour from the onset of labor, the redemption can come even faster.

A car birth, especially one where the car doesn’t stop, is rare enough where word spreads and it gets people talking.  My mother, like many others, had a very hard time wrapping her arms around what happened.  She asked me “Did you deliver the baby?”   Me: “No.”  Her: “Did a paramedic or a policeman come? Me: “No.” Her: “Then who delivered the baby!?”  Me: “The only people in the car were me, my wife and Hashem.” Her: “Then you delivered the baby!?” Me: “My wife delivered her own baby.”  Her: “Who does that?”

It was an odd conversation, but I had many similar ones over the course of Shabbas.  Who delivers their own baby?

As soon as I heard the question, I realized the answer.  The Torah tells us of the harsh decrees Pharaoh inflicted upon the Jewish people before Moses led us out of .  When the time for Moses’ birth had arrived, Pharaohs astrologers foresaw that the redeemer was being born and advised Pharaoh to murder all Jewish male newborns.  To accomplish this, he enlisted two Jewish midwives named Shifra and Puah to do his bidding.  Pharaoh didn’t realize it, but these righteous women would never commit such a terrible act.  When Pharaoh questioned why they hadn’t murdered the Jewish baby boys, they told Pharaoh that the Jewish women aren’t like Egyptian women.  They deliver their own babies before the midwife even arrives.  The Rabbis tell us the midwives were in fact Moses’ mother Yocheved and his older sister Miriam.  Since they were righteous women, there must have been truth to their statement to Pharaoh.

It was this generation, born to mothers who delivered themselves that led the redemption from .

Almost all, if not all, great Rabbis say that we are in the birth pangs (final stage of redemption) of Moshiach.
As most of you reading this perform the mitzvahs of the final preparations before Pesach, and I have the two fold privilege of both preparing for Pesach and preparing for my sons bris which will, G-d willing, take place on the morning before the first Seder, may these mitzvahs usher in the coming of the Moshiach and the final redemption.  As you may recall, at the end of our Seders, we call for “Next Year in .”  I believe that if we perform these mitzvahs with proper intention, it can truly be “This Year in .”

Have a Happy and Kosher Pesach and I hope to see you in soon.
Posted by Ari Miller at 9:10 PM