In the Torah portion of Kedoshim, G-d instructs Moshe to tell the Jewish people that they “You shall be holy for I am holy.”

The very first problem that I encountered when researching the commandment that we should be holy is that according to the great Rabbi, Rambam it’s not even one of the 613 mitzvahs.

This really threw me for a loop.  It’s clearly a statement in the Torah where G-d is commanding us to do something, so why didn’t it make the official list?  What’s the story here?  Is it the 614th Mitzvah?  Was it overlooked?

The verse is simple enough.  We need to be Kadosh or holy.  Kadosh literally means separate just like Kiddush on Friday nights separates between the holy & mundane.

In order to figure out why it isn’t on the list, we first need to explore what it is.  How does one be holy?  When trying to figure out what the Torah is trying to tell us, the first stop is Rashi.  Rashi says all we need to do is to avoid the sexual immorality mentioned in Parsha Kedoshim.  That doesn’t sound too hard.  Ramban, Nachmonadies has a different take on it.  He says that it is nothing to do with the observance of any commandment at all.  It actually comes to tell us on how we should behave in the non-mitzvah part of our life.  He says that we shouldn’t make ourselves disgusting in what’s permissible.  If you think about it, this takes the commandment of kedoshim to a whole new level.

Imagine that you (or anyone that keeps strict kosher dietary laws) is walking with a friend to his house for a Shabbas meal.  He mentions to you that he was driving around the other day and had the sudden urge for some Cheesecake.  There weren’t any kosher restaurants around so he stopped at a non kosher restaurant and ate a piece of cheesecake.  Chances are you may suddenly remember that you left the iron on or had some other reason why you had to go home.  All of a sudden, you may question whether or not you can eat at the guy’s house. 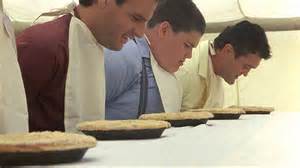 Here’s a second scenario.  You’re walking with the same friend and he tells you that he went to the best kosher bakery around and bought 2 huge kosher cheesecakes.  This bakery had the best hexture.  The cheese was Cholev Yisroal.  The crust was Pas Yisroal.  (the milk was always guarded by a G-d fearing Jew and the crust was baked by a G-d fearing Jew) It couldn’t have got any more kosher.  He brought the 2 large cheese cakes home and proceeded to eat both of them until he got sick.  You might find the story amusing or the guy may even gross you out, but you probably aren’t going to find a reason why you can’t eat at is home.

In the first situation, the guy ate unhextured food.  Maybe he violated a law.  Maybe he didn’t.  Since we don't know what goes on in the kitchen of that restaurant, we don’t really know.  Since eating non kosher cheese is a rabbinic commandment, he may have very well violated it.  Most of us don’t want to take the chance.

In the second scenario, the guy may not have broken any commandments about Kashrus, but according to the Ramban, he is in violation of the biblical commandment of Kedoshim.

We can apply the same scenario to many situations.  We all know that if someone’s later for morning davening, the halacha is that they can skip parts in order to catch up with the minyan.  What about someone who’s late every day?  I know guys who haven’t said the full Shacharis in years.

We also know that if someone has a late business meeting, flight or similar circumstances, it’s permissible for them to daven by themselves, without a minyan.  What about if they want to skip a minyan because they’re at the basketball game?

You can decide on your own what you think the answer is, but the point is clear.

Being holy doesn’t end when we’re not doing a mitzvah.  It pervades every area of a Jew’s life.  It’s not its own mitzvah, because it’s every mitzvah.

It’s the global commandment for a Jew to be kadosh.  To separate himself from any part of the physical world that it’s not in service of G-d.  We don’t do mitzvahs just do discharge our religious obligation and get on with our lives.  Our lives are the mitzvahs themselves.  In the time that we’re not doing mitzvahs directly, we’re preparing ourselves do to do them.  That’s what being kadosh is.  This is what separates us from the gentiles.  They have 7 mitzvahs and we have 613, but the difference isn’t just the quantity it’s the overall mission of the Jew.

In conclusion, it’s no coincidence that just like kadosh means separate or different, our very name and essence, the Ivrei (Hebrew), the other ones, essentially means the same thing… to be holy.
Posted by Ari Miller at 7:48 AM