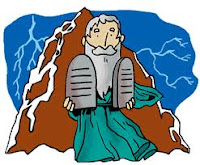 In exactly one week from today, the Jewish people will celebrate the anniversary of their marriage to G-d on Shavous by renewing their vows and once again accepting the Torah.

The relationship between G-d and the Jewish people has been described by the Rabbis as a Marriage with G-d being the groom and the Jewish people being the bride.  Even though that’s a nice idea, marriage is an interesting analogy for the relationship.  On one hand, there are no two people who are more connected then a man and wife.  Their bond is so strong that we compare them to two half’s of the same soul that are connected with marriage.  The alternative side is we know that unfortunately some times marriages don’t work out.

Even though divorce is frowned upon in Judaism, (The Rabbis say that G-d’s alter cries when a couple divorces) it is allowed. Since divorce is allowed, one could apply the possibility of it to the marriage between G-d and the Jewish people.  Considering how many Jews are so far removed from Judaism and act is if they couldn’t care less about what the Torah says, is there grounds for a possible divorce, G-d forbid?  Once we take a look at the laws of divorce, even briefly, we recognize that the bride can not initiate a divorce.  This probably explains why no matter how fare a Jew thinks he his from his Judaism, it’s never severed.  In life’s hardest challenges that same person will often sacrifice his own life rather and sever his connection completely with G-d.  Just like no matter how bad a bride wants to divorce her husband, she can not without his cooperation so since G-d isn’t cooperating, we are eternally bound to him and our marriage commitment through his Torah.

In taking the divorce analogy further, what happens if the groom consents?  What happens if G-d gets so frustrated (so to speak) with our unfaithfulness that he decides to give the divorce document and separate him from us?

To understand this, we must examine the circumstances of the original marriage that happened with the receiving of the 10 commandments on Shavous.  In the Torah portion Yisro, chapter 19 verse 7, Moses came to the elders and instructed them on everything that G-d had commanded him.  In response, the entire Jewish people said, “Everything that Hashem has spoken, we shall do.”  A few lines later, in verse 17, the Torah tells us that the Jewish people stood under the mountain.  There are several explanations of what “under the mountain” means.  In the Gemara Shabbas 88a, it says that G-d picked up the mountain and threatened the Jewish people saying that they should either accept the Torah or he would throw the mountain down and kill them.

The questions is asked, if the Jewish people already accepted the Torah in verse 7, why does G-d need to make a threat in verse 17?  Though there are many explanations, the one that I prefer has to do with an odd law found in a different place in the Torah that doesn’t appear to have anything to do with this at a glance.

In the Torah portion Devarim, chapter 22, verse 28, the Torah tells us that if a man takes a girl by force and lay with her, he may never divorce her.  In looking at this law by itself, it’s pretty strange.  What woman would want to marry her rapist?  And is the punishment for a rapist to lose his right of divorce a fitting punishment for his crime?  It doesn’t seem to make sense.  In fact, I would imagine that since no girl would ever agree to marry someone who took them by force, the entire law is useless.

However, if we equate G-ds threat to the Jewish people of throwing the mountain down, he would essentially become the man who takes a woman by force.  Then, once the marriage is official, he loses the ability to ever divorce her.

It would seem that G-d, in his infinite wisdom set up the scenario just like the Jew is bound to G-d in marriage no matter how far removed he may think he is, G-d has also bound himself, through this law in his perfect Torah, to never leave the Jewish people no matter how many mistakes we make.

Since now that we know our marriage is eternal and nobody is leaving, let’s make it the best possible marriage it can be by reaccepting with a full heart G-d’s Torah on Shavous.  When we do, we can all say once again “Everything that Hashem has spoken, we shall do!”
Posted by Ari Miller at 9:37 PM