About 4 years ago, my family and I moved to a decent size Jewish community.  There are several Torah institutions in town, but we typically go to the big shul.  With a 100+ year history and a good 300 people on Shabbat, there is always something going on.

There are a lot of young families and the shul provides Shabbat programming for different age kids.  For whatever reason there are some kids that don’t go to the Shabbas Groups and end up either sitting with their parents or, more often than not, playing with their friends in the hallways and social hall. 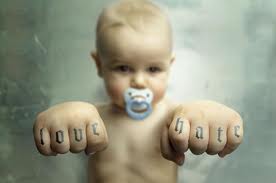 As I’m sure you can imagine a bunch of kids playing without adult supervision can sometimes get lauder than appropriate for a shul.  Personally, I enjoy the sounds of young Jewish children playing in shul, even if I’m praying or learning at the time.  I realize that not everyone appreciates the beauty of the noise and would rather have a quiet atmosphere.  Unfortunately, some of these adults have the bad habit of yelling at the children for running around or being too loud.  I’ve seen this happen both in the hallways and even from the bimah.

I have very few memories of going to shul growing up.  We went to a reform synagogue and I’m sure we didn’t make it so often.  My only memory of Shabbat or holiday services is the Rabbi yelling at me and my friends for being too noisy.  When I started going to shul again in my late 20s, I made it a mission of mine to make sure that other children don’t have the same memories that I do and often come to the kid’s defense.  In my old community, I distinctly remember one of the older members making an announcement at a Kiddush about how parents should control their unruly kids during services.  Afterwards, I made an announcement about how people should control their unruly seniors during services. (The older members of our congregation, made much more noise during services than the kids.)

What is even more perplexing is that the same people who yell at children to be quiet in shul would never dream of yelling at an adult.  If an adult is talking too loudly, they’ll either ask them nicely to keep in quiet or maybe give them a stare, but yell… never.  This doesn’t make any sense.  Adults are responsible for their actions.  Adults understand, at least on some level, that you’re not supposed to make too much noise while other people are praying and listening to the Torah.  It doesn’t make sense to yell and children who don’t know any better while being polite to adults.  It would be proper to be polite to everyone.

My shul is not alone in this phenomenon.  One time when traveling to a different community, I witnessed an old man give a kid a patch, because the kid ran by him and bumped into him.  I was appalled.

To find a proof of what I’m saying is correct, we don’t have to look any further then the opening line of this week’s parsha.  The English translation is “Hashem said to Moses: Say to the Kohanim, the sons of Aaron, and you shall say…”, but we need to look to the Hebrew to get a better understanding.  In Hebrew it’s “Vayomer Hashem Al Moshe Emor.”  There are different ways of saying speak and say in Hebrew and this is the only time that this formula is used.  Typically it would be worded “Vayidaber Hashem Al Moshe L’emor.”

The great Torah commentator, Rashi, tells us that this language is used because Hashem instructs Moses to teach the adult Kohanim (priests) and to have them teach their children.  When dealing with children, we much speak in a softer way.

The laws are very clear that the prohibition of embarrassing someone extends to children as well as adults.

I agree that we need to teach our children a proper awe of G-d and of shul, but that only comes after they develop a healthy love of G-d and shul.